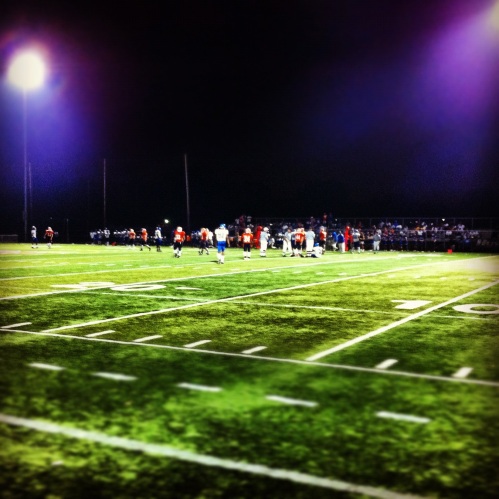 Oak Park-River Forest relied on a strong running game as the Huskies outlasted Proviso East and the heat Friday night, defeating the Pirates 36-20 in Oak Park.

Running back Jakari Cammon ran the ball eight times for 49 yards on the Huskies’ (1-1) opening drive, setting the tone for the game. Cammon ended the drive with a six-yard run into the endzone, putting OPRF up 7-0.

Cammon’s 13-yard touchdown run in the fourth quarter sealed victory for the Huskies, putting them ahead 36-20 with just 2:23 left in the game.

Cammon finished the game with 26 carries for 174 yards and two touchdowns. Despite his success Friday night, Cammon still sees room for improvement in his game.

“I think I played well, but I had a few cuts I missed, I should have took advantage of. It’s just all about watching film and understanding the other team’s defense,” said Cammon.

Quarterback John Phelan threw touchdown passes to wide receivers Simmie Cobbs and Ryan Nelson and ran for another score. Phelan finished 7 of 12 for 102 yards, two touchdowns and one interception. He also had 16 carries for 73 yards and one touchdown.

“I think John’s reads were better in terms of giving the ball to Jakari when he needed to give the ball to Jakari, pull it when he needed to pull it,” said Hoerster. “He threw a couple nice passes which gave the receivers the opportunity to make plays. We’ve been telling him that we have some really talented guys outside that if we can just let them make plays, we’re going to be in good shape.”

Things started off well for the Proviso East (0-2) offense. Running Back Ryan Jones ran for a 49-yard touchdown on the Pirates first snap of the game.

Pirates Quarterback Malcolm Hilliard connected with wide receiver Langdon Johnson for a 34-yard touchdown pass in the second quarter, and added a one-yard touchdown run in the fourth.

Cammon believes the Huskies need to fine-tune their play before they begin West Suburban Silver Conference play next Friday at 7:30 p.m. against Downers Grove North,

“We’ve got to learn from our mistakes. To be a great team, we need to stop the penalties, and just finish drives,” said Cammon. “There were plenty of drives where we got to the 15, 10, got a penalty that called us back, and made the defense come out. We’ve got to finish those drive to become a great team.”

I wrote this story for the Chicago Sun-Times and the Pioneer Press. It appears online here. 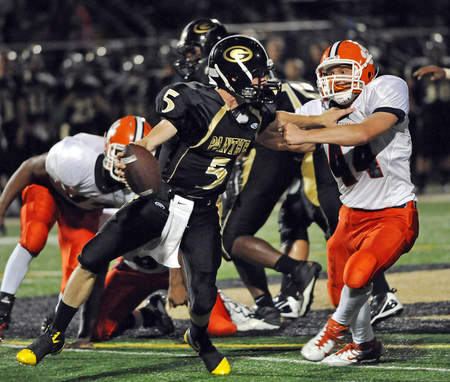 The Panthers started the scoring as senior quarterback Brian Murphy connected with wide receiver Solomon Oquendo on a 37-yard touchdown pass, putting the Panthers up 6-0 late in the first quarter.

On the team’s next drive, senior running back Phil Jackson got the Panthers to the 3-yard line with a 67-yard run. Jackson then gave the Panthers a 12-0 lead on the ensuing play with a three-yard touchdown run up the middle. Jackson finished the game with 11 carries for 109 yards and one touchdown.

Backup running back Mario Rodriguez scored three touchdowns for the Panthers. Rodriguez returned a punt 52 yards for a score in the second quarter, putting the Panthers up 19-0. Rodriguez later added second-half touchdown runs of 9 and 7 yards.

Murphy ended the first half scoring for the Panthers with a 33-yard touchdown run on an option keeper. The Panthers led the Huskies 26-0 at halftime.

“It all starts with the line, they did really good tonight. They exceeded their expectations,” said Jackson. “Then we’ve got out three running backs, me, Justin [Jackson] and Mario. I think we should be pretty good this season.”

Even though his team had a 26-0 halftime lead, Panthers head coach Ryan Wilkens thought his team played better in the second half.

Oak Park quarterback John Phelan bounced back from a forgettable first half (1-8 for 20 yards) with a touchdown scoring drive to start the second half. Phalen ended the drive when he hit a wide open Ryan Nelson for a 54 yard touchdown.

The Huskies got second half touchdowns on an 80-yard fumble recovery from cornerback Kenneth Cheatham and a 29-yard touchdown pass from quarterback Dain Mrozek to wide receiver Jamal Baggett.

I wrote this story for the Chicago Sun-Times. It appears on their prep sports website, yourseason.com