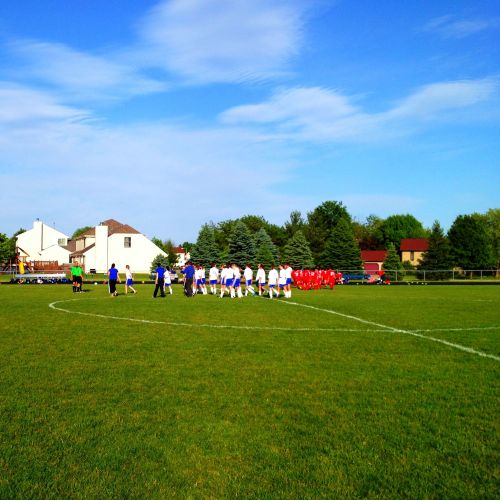 Rosary walks off the field after its 8-0 victory over Hubbard on Tuesday.

Rosary hadn’t played in nearly two weeks, but the Royals looked anything but rusty when they took the field Tuesday in a 2A regional semifinal against Hubbard.

Quincy Kellett had a hat trick and Kallie Renfus added two goals and two assists as Rosary rolled into Saturday’s regional final with an 8-0 victory over Hubbard.

“It was really nice to get back in a game situation,” Renfus said. “We had some time off and we got to focus on some things we wanted to bring to the regionals.”

Less than nine minutes into the game, midfielder Elizabeth Kelley took a feed from Kellett and drilled a shot past Hubbard goalie Karina Arenas to put the Royals up 1-0.

Rosary then scored three goals in two minutes to take a commanding 4-0 lead 15 minutes into the first half.  Kellett scored two of those goals, while the other came from Renfus.

The lightning-quick Kellett, just a freshman, showed once again why she is so valuable for the Royals.

“She makes things happen after you think she’s lost the ball,” Rosary coach Kristy Kane said. “That talent and her speed make her great for our team, she’s been such a great addition this year.”

Rosary (16-5) took a 5-0 lead into halftime after midfielder Julia Callahan scored from five yards out with eight minutes left in the half.

Kellett, Renfus and Callahan each added a goal in the second half as Rosary broke out to a 8-0 lead.

The Royals dominated possession all game and outshot the Greyhounds 33-2.

Rosary keeper Lauren Frasca made two saves as she collected her 12th shutout of the year. Arenas made 14 saves for Hubbard.

Rosary will host the winner of Wednesday’s regional semifinal game between IMSA and Phillips on Saturday at 11 a.m..

After sitting out for nearly two weeks, Kane is happy that her team will be back on the field in just four days.

“I’m feeling good. Even with the long break we’re still doing things well that we were doing well before the break,” Kane said. “I’m looking forward to another game because it’s been too long of a break.”

I wrote this story for the Chicago Sun-Times, Aurora Beacon and yourseason.com. It appears here.