The Knights cut down the nets after defeating Tilden to win the Lisle Sectional.

Providence-St. Mel held off a late Tilden run to capture a 65-52 victory in the Class 2A Lisle Sectional championship game Friday night.

The Knights led by 18 points midway through the third quarter, but an 18-5 Tilden run cut the margin to five (42-37) with six and half minutes left in the fourth quarter.

The Blue Devils (19-14) got within five points three more times in the final frame, but were never able to get closer.

Kendall Gatewood (16 points, 6 steals) made a lay-up to get the Blue Devils within five (48-43) with five and a half minutes to go in the fourth. Khalil Small knocked down a three-pointer on the ensuing Providence-St. Mel (23-7) possession, sparking a 16-5 run that saw the Knights take back control of the game.

“Our guys showed a lot of resilience and they showed a lot of discipline in being able to deal with their run,” said Providence-St. Mel head coach Tim Ervin. “We knew they were going to make a run, so our guys responded well by making sure they kept the lead. I kept reminding the guys that they were still winning, so play like you’re ahead and make sure to stick to the game plan.”

“I knew this was a really big game, and I knew what my team expected of me. I didn’t want to let them down,” said Small. “I had to step up. I didn’t have my greatest game today, but I just gave my all in the fourth quarter.”

The Knights trailed 13-12 early in the second quarter, but went on a 18-3 run to take a 30-16 lead into halftime. Providence-St. Mel scored the first four points of the second half to extend their lead to 18.

The Knights’ second-quarter run was fueled by their pressure defense. Providence-St. Mel forced Tilden into seven turnovers during the final six minutes of the second quarter.

The Knights’ defense forced the Blue Devils into 22 turnovers in total, including nine steals. Small had four steals to lead Providence-St. Mel.

“That’s our trademark, if we’re not playing good defense, we’re going to have problems,” said Ervin. “These guys love to play defense. That’s our motto, we get the job done by playing defense.”

Tevin King made 12 of 13 free throw attempts and led the Knights with 21 points. The sophomore guard was constantly driving to the basket and drew seven fouls as a result.

“Today my game plan was just to be aggressive,” said King. “Offense and defense, be aggressive. That helps my team win.”

Small is confident the Knights can keep their playoff run going.

“I feel really confident going into next week,” said Small.

“We’ve been through a lot this season and we work hard in practice. We love each other and have a strong bond, so I think we can keep on this good run in the playoffs.”

I wrote this story for the Chicago Sun-Times and yourseason.com. It appears here. 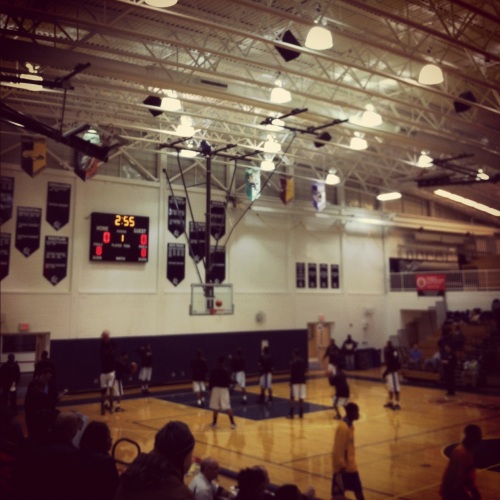 The Knights warming up before Friday’s sectional final.