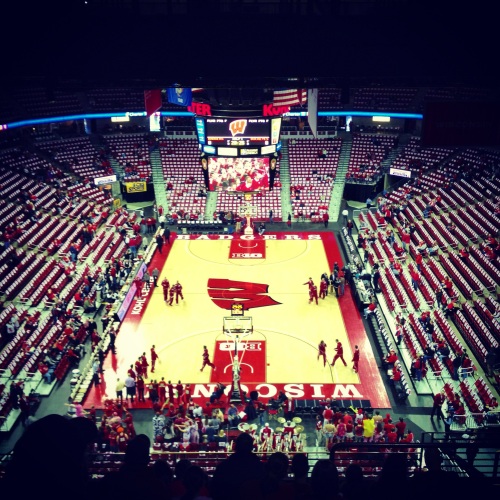 I’ve been attempting to find a silver lining in Wisconsin’s disheartening loss to Purdue on Senior Day at the Kohl Center. I think I may have found one, however it may be a bit pessimistic.

The Badgers’ loss should remind fans and other observers that expectations need to be tempered as we approach the Big Ten and NCAA Tournaments. Bo’s bunch is a solid unit, ranked in the AP top 25 and the KenPom top 5. But the Badgers aren’t built for a deep run in March for one reason, they rely too heavily on the three-point shot.

So, of the 40 teams that made the Final Four the last 10 years, only 5 (or 12.5 percent) have similar three-point profiles to the 2013 Badgers. That group includes three of the most surprising Final Four teams in the history of the NCAA Tournament, 2010 and 2011 Butler and 2011 VCU. The other two in that group, the 2005 Illini and Cardinals, both needed legendary comebacks in the regional finals to make the Final Four.

These numbers shouldn’t be shocking. It’s hard for a team to string four, five or six wins together while relying on a low-percentage shot for a large portion of their offense. Teams need an option that will provide easy looks at the basket, be it a strong post-up player or quick, slashing guard/forward.

The Badgers have not been able to consistently work either into their offense this season, relying too much on threes or mid-range/long twos. Ryan Evans, who leads the Badgers in possessions used (26.6 percent) and shot percentage (26.2), attempts mostly mid-range and long twos.

When the Boilermakers started their charge on Sunday, the Badgers seemed to panic. When Wisconsin should have been looking for an easy shot to get the offense the going again, it was jacking up quick, guarded threes.

What can the Badgers do to change their offense? Getting more out of Jared Berggren in the post and Sam Dekker in all offensive facets would be a good start.

Berggren is shooting a solid 56.5 percent on twos, so it would be in the Badgers’ best interest to focus more on getting him the ball in the post. The 6-10 senior seems more likely to get the ball at the top of they key, but he’s shooting just 26.7 percent from three this season, a 10 percent decrease from 2011-12.

Sam Dekker could be the slasher the Badgers need, he has an offensive creativity not seen from a Wisconsin player since Alando Tucker left Madison in 2007. Dekker has the quickness and strength to drive to the hoop with consistent success and he also happens to be the Badgers’ best three-point shooter (44.8 percent). Dekker needs to have the ball in his hands at crunch time, period.

I’ll end with a note of (semi) optimism. Before Sunday afternoon, the Badgers’ most recent putrid March performance came in their 36-33 loss to Penn State in the 2011 Big Ten Tournament. That squad, led by Jon Leuer and Jordan Taylor, was able to recover and make the Sweet 16. A two or three win run in the NCAA Tournament is still a distinct possibility for the Badgers in 2013. Just don’t expect more than that.