Montini, Westerkamp edge by Marmion in “a real battle” 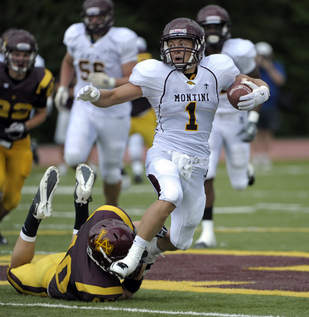 Behind the efforts of star receiver Jordan Westerkamp, Montini took down Marmion 13-6 in a Suburban Catholic Blue battle Friday night in Lombard.

Westerkamp’s fourth-quarter touchdown run was his 44th career visit to the end zone.

“The kid is just amazing, he is a football player through and through. He loves the game and he plays the game the right way. He’s got the talent, the knowledge and the skill,” said Broncos coach Chris Andriano. “We’re really, really thrilled about his Montini career, he’s been amazing and hopefully there’s a lot more to go.”

The star receiver was held to three catches for 21 yards by the Marmion (1-2, 0-1 Suburban Christian Blue) defense, but Westerkamp’s biggest contribution came on the ground when his team needed him the most.

With five minutes remaining in the fourth quarter and the score knotted at 6-6, Westerkamp took a hand-off from backup quarterback Joe Borsellino and ran four yards for a touchdown.

“It was tough, it was aggravating, but we bounced back, that’s what great teams do, they bounce back and they make plays,” said the Nebraska-bound Westerkamp.

Marmion was able to control the pace of the game with a strong running attack. Running back Garret Becker led the Cadets with 16 carries for 75 yards.

“That was a war, that game was a real battle. I’m proud of our kids,” said Andriano.” Marmion had a really good game plan and they’re a physical team. When you can control the clock like that, the offense can get a little bit impatient, and that’s what was happening to us.”

While the Cadets were able to control the clock, they were unable to find the end zone at the conclusion of any of their long drives. Marmion settled for two field goals of 40 and 31 yards from kicker A.J. Friedman.

Montini (2-1, 1-0) quarterback Mark Gorogianis struggled through the air, throwing three interceptions. Gorogianis had one touchdown on the ground, getting the Broncos on the board with a 1-yard touchdown run in the second quarter. The score was set up by a 8-yard run from Borselliono on 4th-and-one that brought the Broncos to the 1-yard line.

I wrote this story for the Chicago Sun-Times. It can be viewed here.

One response to “Montini, Westerkamp edge by Marmion in “a real battle””